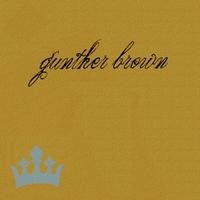 Gunther Brown and his songs could certainly become a great fit for any indie coming-of-age movie or television series soundtrack. It’s not just the expressive vocals but the acoustic electro sound as well as the melodic vibe that makes this one an A++ indie folk pop record.

More often than not, you’ll see Gunther Brown as a duo comprised of Pete Dubuc and Evan Chase. Occasionally, they do transform into a 5 piece crew, with Eric Heintz, Ethan Gamage, Derek Mills and Chris Devlin as additional members.
This self-titled compilation is a collection of EPs and singles the band has released in their previous records.

Gunther Brown has been hailed as one of “the” bands to watch out for. Listening to their music, this isn’t tough to imagine. Their brand of acoustic indie altrock is beautiful, pleasant and definitely heartwarming. They’re the type of band you’d love to play right before you sleep at night to remind you about your wonderful day or if you simply want to reminisce about the good times.

Madison is a quiet, reflective opener for the compilation. This folk pop cut features gravelly vocals accompanied by somber piano and expressive lyrics. Later on, the song very slightly changes pace as it embraces marching band snares and cymbals. Meanwhile, Vultures and California bounce off some good vibes, opening with upbeat acoustic strumming and matching it with great lyrics. The boys even add a slight country honky tonk in the record with the Great Eustis Jailbreak; incorporating mandolins and handclaps.

Perhaps, Bob Keyes from The Portland Press Herald best sums up the band – describing and including them among his “10 to Watch” article:

Gunther Brown’s music is earthy, eloquent and entirely honest. The four-piece band from Portland reminds one of early Jayhawks, with maybe a touch of Wilco. It’s Americana music, with roots that spread to folk, rock and old-time country.

This rings true. It’s hard to find great quality music online but when you do find that band or album, you’ll know that you have something special on your hands. Take a listen.