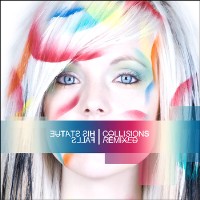 His Statue Falls is a unique band in that they combine various genres to weed out their own characteristic sound. Mixing techno, screamo, pop and breakdowns; the German group dubbed their sound as “techcore.”

Music catches on fast and soon they were playing at more than 150 shows and other groups started to create a similar sound. Not to be deterred, the band pushed forward and continue to mold their music according to their taste.

Collisions Remixed is based off their debut record and contains a spin off of some of their best tracks from the album.

Listening to His Statue Falls is quite interesting. It’s hard to find the right words to express all the synchronized chaos that goes into the songs. There’s electronic beats in every corner, autotune, growling and melodic pop harmonies all rolled into one. Personally, the songs are great for dissecting and as a whole actually sound really good.

Collisions Remixed is an upgrade of the tracks from their debut album, Collisions back in 2010. It contains 8-tracks, all remixed and added with that extra special dancefloor touch. Among the best singles to check out include opening cut, Bury My Shell At Wounded Knee (Bionic Ghost Kids Remix), Capital H Capital O (See My Point Remix), as well as You Need Hit To Spell Shit (Opava Remix).

There’s no denying that the album is meant as your best companion on the dancefloor. Filled with expert mixes, it’s a charming compilation to play on a house party or a club. Even if you might not like the whole screamo part, these boys possess skills in creating their own unique sound.

All of the tracks were mixed by Christian Diehl at Think Audio Recordings, by the way. So if you want something to groove to on that Saturday night, grab the download and enjoy.