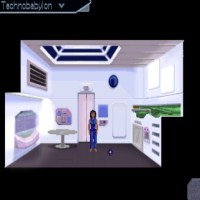 Technobabylon Part III is an interesting game and the third installment from the series. If you haven’t heard of it yet, then let me give you a brief background.

The game is set in a world where internet addicts, terrorists and conspiracies reign supreme. As the bomber is on the loose you play a Doctor who is trying to piece all the information together and work as a possible informant. It’s a fun game to play, plus it’s coupled with great writing.

With this third installment, developers are hoping to maintain the consistency between the other two games.

The game revolves around Latha Sesame, who finds herself being questioned by authorities in relation to a bombing incident involving a a trance-addict, agoraphobic bomber. On the other side of the story, there’s CEL agent Doctor Regis who finally discovers his blackmailer and is tasked to conduct an interview with a shaken up woman that’s a possible informant about the bomb attack to the CEL department. Doctor Regis must protect the girl and at the same time figure out who is responsible for the attacks.

Technobabylon Part III is an interesting puzzle game that has a nice narrative and cool game play. Fans of the series will enjoy this third installment. Little quirks like the inventory system being improved and the addition of mini games, which are quite enjoyable by themselves, offer something different to the series. Puzzles for the game are also much more clever than the previous episodes.

Overall, the game has improved from its previous releases. The storyline seems to be pretty solid and might build up into a climax in the next few episodes.