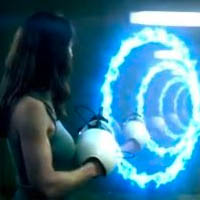 Valve has been getting plenty of great fan film renditions in honor of their games lately. First there was Escape from City 17, a short fan film created by The Purchase Brothers based on Half Life 2. This time around, it’s Valve’s Portal video game that’s getting the treatment.

Portal: No Escape is a short film directed by Dan Trachtenberg. Although he’s been working on the project for a year and half, it’s only in August of this year that he was able to release it.

The movie focuses on what is believed to be the character of Chell (Danielle Rayne) as she wakes up and discovers that she’s a prisoner. With no memory, she eventually discovers the Portal gun and uses it to escape.

The movie is only 7 minutes long but it’s definitely intense. If you play the Portal video game, you’ll realize that the movie is slightly darker in tone. Whereas in the game, you put to use your puzzle solving skills and somewhat refrain from violence by using the device to transport you in different areas. The movie definitely has an air of darkness and danger to it that might seem a bit more gritty than it was in the game.

I won’t mention how the movie goes as a whole, it’s only a couple of minutes long after all and don’t want to rob you of the experience.  However, the CGI effects shown in the film definitely make it top notch. It brings in that professional look and would make you think that this was a movie made by Valve themselves. Moreover, the bits of action in the film are quite engaging. Thanks to great acting, editing and scoring; the mini movie transports you into the world of Portal. A world that even fans of the game might be happy to see translated into live action.

Directed by Dan Trachtenberg, he is also a commercial director as well as a host for the Webby Awards winning internet program, The Totally Rad Show.  He has also directed a horror film last May, More Than You Can Chew, which was for Black Box TV.

You can watch the entire film online, check out the making or grab the download. Either way, it’ll be worth your time.