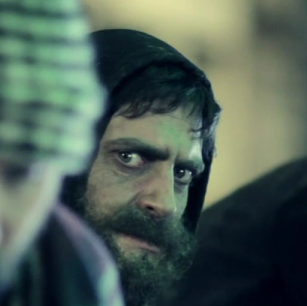 Directed by Nuno Rocha, Momentos, is a stunning short film with an aim; to remind you that life is good, that family and friends will “find” you even in the toughest of times.

The short has already won a handful of awards; starting from Cinematic Achievement Award at the International Short Film Festival in Greece, to Audience Award at a Film Festival in France. With wonderfully acted scenes, characterization, perfect camera work, and a powerful message, Momentos will surely take you on one unforgettable ride.

The short starts off with a white van stopping in front of the store. The men exit and carefully place three large TVs right in its display taking down the curtains that would otherwise hide the screens from the public view. The van than swiftly drives off waking up the homeless man resting in front of the store’s display.
And this is where the real story begins.

The flatscreen TVs are soon turned on and the homeless man sits up, still a little bewildered, watching the movie that took over the pixels. But than after a while something changes. Someone on the outside gives a signal and a new film is soon displayed on the screens. This time, however, its not a latest comedy or drama, it is a video shot by a family of the homeless man from years past. The main character in the story can not stop watching as his little daughter and wife smile to the camera. It was a long time ago, but all the memories are slowly coming back.
And then all of the sudden the white van is back… and so is the man’s family.

Momentos is one of those warm movies that will make you think, reminisce, and appreciate what you’ve got. It’s done with a spot on direction that leave you, the viewer, wandering what happened to the family, what broke them off? What will happen now, that they seen each other after the years?