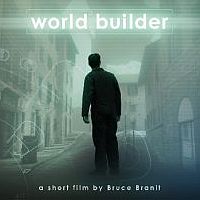 The film starts with hologram images up in the air, with a man lying down, flipping over these images with his finger. On his right arm is a digitized timer, projecting 59:59 – a second less than an hour for him to do what he’s got to do.

“World Builder” is an award-winning romantic science fiction that was written, directed, and produced by Bruce Branit, a visual effects connoisseur well-known for co-creating “405” with Jeremy Hunt.

For about nine minutes, “World Builder” will take you on a journey into a virtual world where all emotions are profound and for real. One man builds a world, one woman takes a little stroll, and the rest is for the creative imagination of the audience. The film was created with Newtek LightWave3D, EyeOn Digital Fusion, Adobe Photoshop and Premiere, and Dell Computers. Kudos to Randy Skach and Jason Sartain for a neat work on the musical score and music production, respectively.

Brian Paulette acts brilliantly as a man who is missing someone he loves, and dealing with so much pain. Where there is void, be builds one structure after another, until he arrives at his desired landscape. He then takes time to finish his work on a flower to make sure that it’s perfectly textured, tilted and shaded. Paulette’s artistically nuanced acting beats a thousand words in any screenplay. Equally convincing is Erin McGrane as the object of the world builder’s affection. She shows up in a hospital gown and steps out into a beautiful — perhaps familiar – street. She is overwhelmed by mixed emotions. She literally stops to touch and smell the flower that the world builder has meticulously designed for her. McGrane effortlessly breathes vibrance into the otherwise melancholic film. But when she shows sadness, the audience holds on, hoping to see her feel better.

The film’s ending will inspire a million interpretations, but there could only be one word to describe it: amazing!