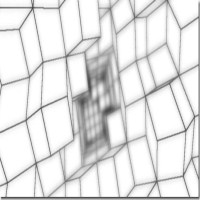 Activate the Three Artefacts and then Leave

Simplicity is beauty. However, Activate the Three Artefacts (sic) and then Leave takes this concept to a whole new level. The game places you inside a world filled with various lines that form and create optical illusions. Your objective is to find and activate three objects so you can escape from this chaotic world of mazes.

Although it might seem like a simple game, it will definitely drive you to your wits end. Developed by Increpare Games, the game incorporates a mindnumbing maze, ambient sounds and a wickedly sinister gameplay.

Give your puzzle solving skills a good exercise by playing this crazy but entertaining game. If you go through the many reviews of this game, you’ll come across similar statements from various reviewers. A short description from Feed the Gamer captures it perfectly, for them the game “plays a bit like the hallucination of a sedated hospital patient who’s been left staring at white ceiling tiles.” And true enough, it does. After playing this game, you would get a pretty good idea of what it’s like to be a bit crazy. Despite the seemingly simple premise of locating and activating only three objects then escaping; looking for these objects requires attention, a keen eye and insane patience that you’ll only find in hardcore gamers.

When you start off, you’re immediately transported to a white world with a small dot in a distance. Head for this dot and you’ll find that it’s a huge maze. This is where the “adventure” begins.

Controls for the game are simple. Just use the mouse and WASD keys to maneuver around. Don’t be shocked at the apparent lack of a title screen or save point. Your only way out is to press Escape and you will need to start over every time you muster enough courage to play it again.

Essentially, Activate… is an atmospheric game that transports you into a different world. The ambient sound that accompanies it makes the mood perfect. It’s a bizarre trip to a dream world made up of lines, boxes, mazes and various structures. If you’re up for a good challenge and don’t mind diving head first into a world of claustrophobic tunnels and completely disorienting structures, go ahead and give this game a try.