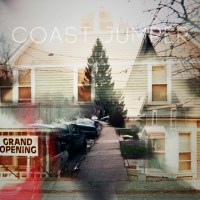 Moody and hypnotic, those two words best describe this debut album from San Francisco based band, Coast Jumper. The record is a haven of lush sounds, interesting vocals, and slightly electronic alternative vibe.

This is the group’s first album ever and yet they’re exuding  confidence like seasoned veterans of the music scene.

Although there’s not much about the band online, it’s enough to know that these guys play hauntingly beautiful music. Their sound is reminiscent of a mellow Vampire Weekend complete with injections of fun and energetic moments here and there.

Released last August 2011, Coast Jumper is made up of Ariyan, Dave, Nick, Hans and Jordan. This quintet might be newcomers to the world of indie music but there’s no doubt they’ve created quite a gem with Grand Opening. Their sound shows hints of folk, pop, indie, alternative and even progressive rock. From the vocals, the compositions and the mood, these guys definitely have something worth checking out.

Tracks like Don’t Talk (Put Your Head On My Shoulder) and Windowsill are both charming. They consist of beautiful instrument work accompanied by uptempo beats and lovely relaxing vocal work making them an instant favorite in my book. It’s not just the lively cuts that shape the band’s music, some of the really good tracks from the group are those that are more mellow.

Please Stay Awake and Infinite Something are examples of how these guys can easily turn the volume down and still keep you interested. With a great mix of synths and moody instruments, the songs are perfect for creating a dreamy, hazy vibe.

Overall, Grand Opening is a must-listen record. Even if you don’t fall in love with it instantly, give it a second round and you’ll realize it’s an album worth having.