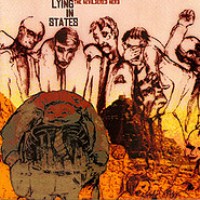 Lying in States: The Bewildered Herd

After breaking out into the scene in 1999, Lying in States found themselves touring alongside other American indie bands like Hot Hot Heat, Rye Coalition and Denali to name a few.

These Chicago natives initially released this EP, The Bewildered Herd, back in 2002. Followed by a full-length album in 2004, Most Every Night, and a second album in 2006 titled, Wildfire on the Lake.

These two albums were released under local label, Flameshovel. The band is made up of Justin Trombly -bass, Fergus Kaiser – guitar, Ben Clarke – vocals, guitar, Mark Benson – drums and Jeremy Ohmes – keyboards. Not quite sure whether the group is still alive and kicking after 2006. Couldn’t find anything pointing otherwise either. Oh well, one thing’s for sure.  If you love shoegazer indie rock, then this is a record worth checking out. The Bewildered Herd is a 6 track compilation that infuses indie shoegaze rock with a touch of emo and punk. The nice thing though is that the band successfully merges these elements into something that takes away the triteness of the individual genres; creating tracks that are interesting to listen to and love.

The slightly dancy, Automotons, opens up the EP. The cut contains nice understated vocals with flowing instrument work. There are some songs that you can easily tell were recorded at a certain time or year, but this one transcends and can easily pass for a cut that was recorded recently. Leave Me for Dead, is a more uptempo rockish track that’s packed with hard rock guitars and screaming vocals. I can imagine this is probably how you would feel if you woke up after a night of booze and partying.

On the other hand, Holier than Cow is another cut that’s worth listening to. The sleepy vocals adds a gorgeous touch to the slightly dreamy garage sound. One of the cuts in the album I don’t mind playing over and over again.

Lying in States is one band that knows their way around their type of music. Unlike other bands who feel their way through, these guys can probably play their own unique sound blindfolded. Whether they really can or I’m just in love with their sound too much; there’s no denying that this EP is worth downloading. It’s free anyway.