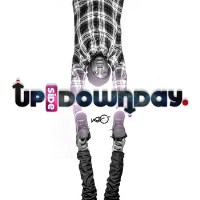 This mixtape from WolF J McFarlane might be a few years old, but the sound is as current as ever. Blasting your ears with a great mix of samples, catchy beats and uptempo tracks; the album is a great audio experience from beginning to end.

UpSideDownDay was released back in December 2009 and combines a flurry of tracks that’s best described as “neo hip hop.” Mixing traditional beats and samples with unexpected rhymes and sounds; the album is a refreshing take on the usual hip hop sound.

Here’s a little excerpt from his site about the artist:

WolF J McFarlane is part of a new wave of artistes who focus on developing themselves in all disciplines of art. A graphic designer, videographer and most importantly a singer/songwriter, Wolf is inviting eyes and ears to a reality of his own, a technicolour soundscape. His music is a mixture of Hip-Hop and alternative pop, and his writing is a focus on matters of the heart conceptualized throughÂ otherworldly imagery and metaphors. (WolfJ.com)

Indeed, just listening to the first few tracks you’ll recognize the artists’ overabundance of talent. Opening with the title single, the track combines spoken word with a breezy, R&B / electro beat. It’s a short intro but the kind that sticks to you the moment you hear it. It’s followed by Cut Fabric, which showcases a more danceable rhythm and some thought provoking lyrics. The catchy chorus is perfect for any dance club. Seriously, it’s hard not to like this song after just one listen.

The more you listen to the album, the more you’ll notice the various types of sounds and genres explored in much of the cuts. From rock, world music, electro, trip hop, even tribal percussions; every single thing is carefully and skillfully paired with great rhymes. The lyrics in most tracks are also worth checking out.

UpSideDownDay brings a new type of hip hop that pushes the boundaries of what the industry holds as the norm these days. You won’t regret grabbing this album at all. It’s amazing that it’s even offered for free. Take a listen.