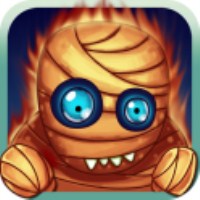 Pumpkins vs. Monsters is a free Android game that will easily win your heart. Hailed by many as among the most addictive Android games ever released, it’s certainly a game worth looking into.

Developed by Runner Games Studios, this is the same team that has created other popular Android games like Doodle Dash, Tiny Robots and Alien Invasion just to name a few.

For Pumpkins vs. Monsters, the game pits you against a hoard of monsters. Pretty much, your pumpkin garden and pumpking throwing skills is your best defense against keeping these monsters at bay.

With hordes of monsters marching in from the front, your job is to generate pumpkins and use them to knock down these bad guys back to the underworld. The pumpkins are divided in different colors, mainly orange and green. In order to fire them off, you have to collect a row or column of at least 3 similar colored pumpkins before you can launch them. Sometimes, there are gravestones randomly placed on the path so you have to exercise your puzzle solving skills and move the similar colored pumpkins in the same area.

Pumpkins vs. Monsters offers two different game options: Story Mode and Endless. Each of these types have their own specific mechanics as well. For instance, in Story Mode, there are three main zones: Protection of the Territory, The Mummy Returns, and Mayan War. In each zone, there are 15 levels each.

Like most games, the levels become a bit more tougher as you progress. The enemies and other forms of monsters that show up will also become much harder to kill than regular ones. Luckily, you’re also given a chance to upgrade your arsenal since the game provides a shop wherein you can purchase shields, dynamites or pumpkin power ups to make your pumpkins even more potent.

All in all, the game is great fun to play. There’s the puzzle element of having to move the pumpkins around to get them to group in the same color and there’s also the action part where you get to kill off the zombies. Give it a try.