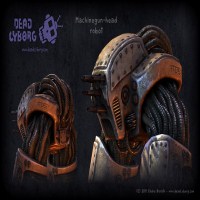 Dead Cyborg 1: The Beginning of the Death

Dead Cyborg might seem like just another first person shooting game, but it actually has its charm. Developed by Barathe Endre, only the first episode is finished so far but it’s been receiving good reviews since it first came out.

This science fiction shooter game is offered at a pay-what-you-want download. All the donations are used to help fund the development of the succeeding episodes; with each episode geared at providing at least 2-3 hours worth of gameplay.

The game works on a variety of systems including the top three: Linux, Windows and Mac and is certainly worth checking out.

In Dead Cyborg, you wake up inside a shuttle cabin with no memory or recollection of how you got there as well as why. As you continue to explore, you realize that you’re a survivor of the current war between humans and robots. Your goal is to escape from the facility and survive.

Even though gameplay is a bit standard, the game controls are a bit unusual. If you’re like me and spent countless hours playing games, then you must be used to maneuvering the mouse to look around your surroundings while using arrow keys for movement. In the game, however, you use WASD for movement while tinkering with the arrow keys will shift and move your camera or perspective. This takes a bit of getting used to and can become frustrating if you don’t figure it out.

In spite of this little quirk, the rest of the game plays well. It’s not exactly mindblowing but the graphics are pretty good. Gameplay is interesting and engaging. If you can muster some patience in figuring out how the controls work, then you might actually enjoy this game a lot. Overall, it’s quite cool to try out.