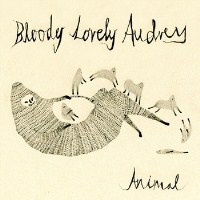 If you love the Yeah Yeah Yeahs and looking for an indie band alternative that comes close, Bloody Lovely Audrey should be first on your list. The band is made up of Sinead Curry – Vocals, Rob Cleary – Guitars, Andy Cavenagh – Bass and Seb Guajardo – Drums.

In the words of their bassist, their sound would be the outcome “if Nirvana, Yeah Yeah Yeahs and Queens of the Stone Age had a baby…and drank heavily during the pregnancy.”  This is quite accurate since their music is a great blend of stoner rock, slight hipster with female-led vocals. You’d imagine them as playing in some cool downtown club with plenty of rock lovin’ from the crowd.

All four members met while they were studying a theatre/media course in Charles Sturt University off Bathurst. Set on stepping away from the “indie scene” they decide to bring back rock to the way it was; with heavy riffs, some generous bass, explosive vocals and a whole lot of attitude.

Animals is the band’s debut EP. It’s a bit short, with only 4 tracks included but it serves as a nice little introduction to the groups primal sound. The four tracks are explosive and ooze with raw energy. From the opening single, House of Horrors, the band kicks through the door with great bravado. Taking listeners captive with their catchy stoner rock sound. Title track, Animal, also won the band plenty of attention. It’s a slower cut but it still exudes that sexy rock and roll sound the band has become known for.

Bloody Lovely Audrey is definitely a band to keep an eye on. Hopefully they’ll release a full record soon. For now, enjoy this sweet EP. It’s available for free.