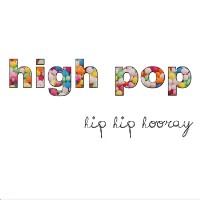 If your’e in the mood for some hazy, garage rock and saccharine pop, then High Pop is the band you should be listening to.

After a successful run with their previous record, Hip Hip Hooray delivers the same sweet and intoxicating punk fuzz pop they’ve come to master. Treading this route the second time around has its benefits though, the band sounds more polished than ever and seem more comfortable with their chosen genre.

Be prepared for track after track of energy filled, freaky indie rock mixed with a whole lot of sugary pop when you listen to this record.

Hip Hip Hooray is like a long lost cassette or record you discover one lazy summer afternoon. The more you listen to the album, the easier it is to get lost in the mood and imagery painted by the music.

Kickstarting this love affair is the fuzzy indie folk pop number, Loner. It’s a track that maintains the right amount of lo-fi dirty guitars, warbled vocals and catchy harmony to mimic how it feels like to look through a kaleidoscope of colorful beauty.

Each track resonates with a lo-fi appeal that’s highlighted by the beautiful harmonies High Pop creates even with just simple instruments. A few cuts worth noting include Crawl, I Like the Smell, Sparkler as well as the grungy, Fast Kids.

Personally, the album is refreshing. It’s hard not to compare it to a soundtrack in a Sofia Coppola film; beautiful, ethereal and all that indie lo-fi goodness rolled into one.

If you have a soft spot for this type of music then don’t skip out on this one. The album is worth checking out and downloading, no doubt about it.