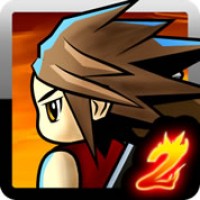 Its always great to play a sequel game and continue the story with a bit of tweaks and advancements. Devil Ninja2 takes things up from where Devil Ninja left and adds a new Boss for hours of fun and enchanting gameplay.

Developed by Droid Studio, who have a very successful rate in the Android App market, Devil Ninja2 has already won some favorable reviews. The game is very sweet to look at and surely will be eye-candy on the higher-end Android monsters with revolutionary displays.

Devil Ninja2 takes its cue from the old arcade games with revamped graphics and a touch of very cute characters trying to act tough. Graphics are definitely something to talk about, with perfectly integrated gameplay mechanism that would get any casual gamer riding in no time.

The game is a never-ending one and requires the player to jumping over, try to avoid, or simply attack everything on their way. It seems fairly easy when you try to defeat the not-too-powerful baddies, but things get serious when the “Boss” steps into the scene. Players need to pick-up power and special objects that will enhance the gameplay in the long run.

So, what really sets this game apart from the original version? You guessed it right, its the addition of the powerful Boss fight with added difficulties and a boss health bar, which spans the entire lower part of the screen. The boss level is a real pain with users not only facing the big baddie but also destroying a number of nemesis along the way, making the entire gameplay a real tough task and a bit annoying at times (at least for me).

Overall, its one of those games that will be a great time-killer and an awesome one for the kids. Characters, environments, gameplay, action everything takes cue from Chinese characters and it is good in more ways than one. A total of 4.5 stars and over 10,800 downloads in the Android Market, you cannot go wrong with this one.