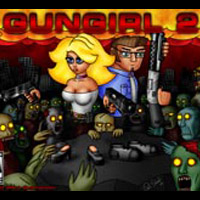 GunGirl 2 is a Side-Scroller Action/Adventure Game created by Paul Schneider. After choosing to become a gun girl or a gun dude (depending on which gender you prefer), a player is then released into a zombie infested world. To put it simply, the aim of this game is to make it through each of its levels, killing zombies-while also evading their touch. Eventually, a player will find the demon responsible for creating the zombie-apocalypse and defeat it. This game also adds the ability to gain power ups and these can be used to upgrade personal attributes.

Furthermore, it is important to mention that there is a lot of gore involved in the graphics of this game. This is definitely a selling point for blood-thirsty gamers who love to see the consequences of their attacks, although, I would not recommend this game to anyone below the age of 15.

Graphics are similar to games found on a SNES and the soundtrack of this game is amazing. Heavy metal music is always a good choice for a zombie game. The game is actually refreshingly difficult and those who are not encouraged by that, may find an incentive in improving their character through the games ‘level-up’ system.

Like many RPG’s, there are plenty of side quests to engage in and survivors to save. A player must adhere to all of these if he/she wants to gain a 100 percent completion of the game. However, for those who simply want to finish the games story line, there is the option of ignoring these aspects.

Overall, this is a great game and players will spend a vast amount of time completing it. However, for some, the games difficulty might be too overwhelming and this may lead to frustration and an early resignation. My advice is, try this game because it will only take a short time to figure out whether it is for you.