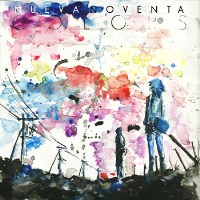 A product of years of work and countless rehearsals; Colors by Nueva Noventa contains a lushness that only time could have filled and created.

Nueva Noventa is a four piece indie rock crew from Santiago, Chile. Their sound focuses on indie pop rock but also introduces elements of electronica once in awhile.

There’s nothing much out there about the band or the members themselves. It seems they’re among the few bands who like to let their sound do all the talking instead. Frankly, this works just fine as their music is capable of communicating and reaching out to its audience.

Starting somber and slow with Young Winters, you can almost expect the band to be an electronic, ambient group after listening to this one. The track is purely instrumental and filled with soaring guitars, twinkly piano work and epic swells. It’s this capacity to capture emotion in an instrumental track that really defines the band for me.

Other tracks like, Between Raindrops and Connections, sees the band embrace their full-on indie rock persona. This time around they incorporate vocals to a nice mix of alternative rockish guitars and some melodic sound. Meanwhile, title track Colors, is a beautiful landscape of sound that showcases acoustic guitars along with some emotional singing.

Even though there are times when the singing comes off as a bit too whiny, the underlying music manages to make up for it. The band has a knack for creating this lush swirl of sounds that you can easily get lost in if you want to. Give the album a listen.