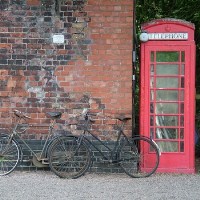 Containing a mix of flowy and sometimes gritty instrumental tracks, Bicycles is more of a metaphore for how these two wheeled contraptions allows us to travel and take us to places.

Mark.Nine’s sound is a lot like that. It’s both soothing and disturbing (on occasion) compelling its listeners to seek what’s beyond. There’s a mix of uptempo rhythms, to ethereal sounding cuts; there are even slight dance tracks contained within some of the singles.

Not much is available about the singer, even his Facebook info section only states that he’s “a figment of your imagination.” His sound is real though and it’s quite worth taking a listen to.

This isn’t the artists’ first foray into releasing a record, he’s actually been doing the rounds since 2007. Releasing one of his first compilations, Artificial Horizon right over at BandCamp. He followed it up with a few other singles and an album in 2008 titled, Terminal C. All of his material are offered for free and licensed with Creative Commons. Apart from the free download, the artist is also releasing a number of limited edition CDs for about $5.

Opening single, Bicycles, is a dreamy piano-infused cut. It’s a poetic song that has a lovely classical style melody; making it ideal if you want some quiet time. Meanwhile, An Afterthought, echoes the same sentiments as the opening cut but this time it comes with heavier drums and quite a few samples lurking at the background. Several other cuts worth noting include Solar Flare, Oxygen Supply and the near 10-minute single, Token Rings.

If you ever need some ambient sounds to keep you company through your downtime, then this is a great album to check out. Grab the download over at BandCamp.