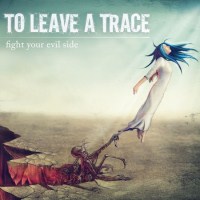 To Leave A Trace: Fight Your Evil Side

Just after a year of playing music together, this four piece rock band from the Ukraine decided to release their debut LP, Fight Your Evil Side. Leave A Trace certainly knows how to bring a fusion of rock, metal and even melodic screamo to their fans.

Their album is packed with 10 powerful tracks that comes with Oksana’s hard rock growling. By the way, yes, Oksana is a girl. Leave A Trace has already started touring and playing festivals in various areas in the Ukraine and Europe. Currently, they have several shows lined up in Poland and are also gearing up to recording a new album.

Meanwhile, Fight Your Evil Side does offer great insight into the inner workings of the band. Songs like title track, “Fight Your Evil Side” represent the band quite well. It comes with strong vocals that alternate between growling to sweet pop singing. Another interesting track is “Your Beautiful Eyes,” probably because it features more of Oksana’s regular singing voice (which is much better in my opinion) rather than her growling female chops. Â The instrument work also deserve a worthy mention.

The band is one of the few to admit that their songs are about their faith. Of course, listeners can definitely see the similarities with bands like Paramore and Flyleaf. Hopefully, To Leave A Trace can forge their own path and distinct sound especially in their upcoming album.