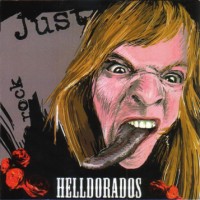 Hardcore rock and roll that spells out what it means to have balls. Okay, so maybe I’m just a sucker for bands that don’t take themselves too seriously, but still make fun, kickin’ music. Helldorados is definitely this type of band, hence, falling for them is not very difficult.

Just Rock is a compilation of 11 tracks that are as rock and roll as can be. It’s a mix of late 80s glam rock, with the chant vocals, and guitar licks. Although it might not be “spectacular,” the album is good fun to listen to especially if you want to pass away the time.

If you’ve been silently hoping for good old rock and roll to come back, then this might be the closest you can get. It’s pure rock without the fuss. Yes, it might seem a bit basic, almost formulaic, but you have to admit that this band creates good catchy songs.

Just Rock opens up with the title track, which is a catchy 5 minute number, accompanied by the signature chant. It’s hard to not picture this song playing in some arena somewhere while a massive audience sings back “Just rock!!” back to singer. Other tracks like Cock & Loaded were a bit lacking, especially in the vocals department, but it pulled through somehow.

Sleaze metal at its best according to the band, Helldorados certainly is one band that you can enjoy if you like this genre best.

Even though the band first released Just Rock back in 1997, they continue on even today. In their Myspace site, they state that the band has performed “over 80 concerts in two years and support shows for the Bloodlights and Harmful or Die Happy, the Band has proved that they are ready for the new millennium. Encounters with the devils of the music industry and ignorant newsmen didn’t slow them down. The Helldorados sound to move to, words that speak, and looks that heroes are made of remains resolute. Out of the ruins of Stuttgart come the Helldorados. So dust off, open up your eyes and scream until you like it!”

Surely, if late 70s-80s rock music is your cup of tea, then hit yourself with a shot of Helldorados. It just might be what you need after a long hard day at work.