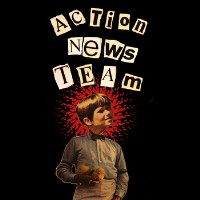 Action News Team: How To Defend Yourself Against Fresh Fruit

Action News Team is as eclectic as can be with their new record, How to Defend Yourself Against Fresh Fruit. The album comes with a host of blues, rock, jazz and alternative punk sounds that seem tossed inside one giant blender and turned into a smoothie.

The band hasn’t been sitting idly, in fact they’ve released about 12 compilations and singles since last year on BandCamp. This is the latest from the roster and the second one to be featured here in the blog.

According to the band, they only intended to create a 5-track EP but ended up having a 17-track record instead. No harm done though since the record sears with great rock tunes from start to finish.

After being greeted by a raucous and short intro, second cut, Getting Old Sucks, follows suit. Bearing deep, rockish guitars and an abundance of rolling drums, the track feels like a CBGB punk staple. Moreover, the slurry vocals and slight uptempo beat add to the band’s magnificence in this track.

It’s followed by a decidedly more mellow 70s-style rock and roll single in Pope Mobile. It’s easy to imagine the Lizard King freaking out on stage to this one. A few personal picks from the record are Naked Mud People; trippy title track, How to Defend Yourself Against Fresh Fruit; as well as the heavily blues rock, Harmless Fun.

Influenced by groups such as Sonic Youth, The Pixies and the Stooges, it’s easy to pick out their hand in developing the band’s current taste.

Overall, this is a fun compilation that could find a special place on your playlist. It’s perfect for anyone who has a heart for old-fashioned rock and those who like things a little eclectic and weird. Grab the compilation. It’s available for free download.