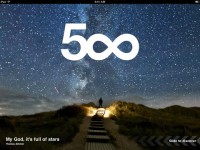 The true power of the iPad is said by many to be present in the gorgeous 9.7-inch screen. Apart from games, sadly there are very few apps that bring out the beast hidden in the display. So all iPad owners who want to push the envelope should download the 500px app.

Developed by 500px themselves, the app is a portfolio-building network, rather than a photo-sharing service, which offers users quality over quantity. So unlike Flickr, Picasa and other photo-sharing networking sites, 500px aims at encouraging users to upload and publish the cream of the crop with detailing riding it to the finishing line.

Basically, 500px is for people who breathe, eat and live photographs. And now users can share, upload, and like the world’s best photo from hardcore shutterbugs right on the iPad without the need of shifting to the desktop. The best addition to the whole apps ecosystem is the ability to transform the iPad into a full-fledged digital photo-frame complete with music being played from the iTunes library. If only the best things could always be integrated so smoothly and efficiently.

The iPad 500px app has some wonderful additions that provide the users with ability to browse through the most popular, editors choice, upcoming and newly added photo streams. Users keep uploading photos by-the-dozen in real-time, so a constant refresh is also adding an extra touch to the process.

Furthermore, not only does 500px allow for voting on photos, adding to favorites, reading through user comments and even leaving own comments, it also displays various photograph information like EXIF information, descriptions, locations and watermarks. Alongside the pictures, users can also view the profile of the photographer, which includes, camera model, focal length, shutter speed, ISO, aperture, including anything else that is a haven of pride for the photographer and envy for the competitor.

Overall, 500px is a great app and the developers have taken the best route by developing it as an iPad specific one and making full use of the 9.7-inch display. There is also one more great benefit for iPad 2 users with Apple TV; the AirPlay feature enables for sharing the cream of the crop pictures from around the world right on the users HDTV. Things also are taken to the next-level as users of the iPad 500px app do not need to have a 500px account for viewing the most popular pictures. A must have for every photography enthusiast, detail lover or just the casual person who belives in “A picture is worth a thousand words”.