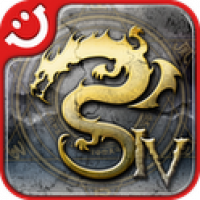 Fans of the orignal and subsequent Inotia titles are in for a treat with Inotia 4: Assassin of Berkel. This part carries the legacy of the game forward and to a certain extent, does outdo the previous title.

The game was developed by Com2Us, who already has quite an impressive feat of games in their portfolio. This developer makes games not only with great play-ability factor, but also integrates quality into the final product, with minimum bugs or lag.

Intoia 4 brings to players 6 different classes of characters (including Dark Knight, Priest, Warlock, and Assassin) and 90 skills to learn. Additionally, players will also have access to over 400 maps for exploration of various terrain like dry deserts, freezing snowfields and dark dungeons. Inotia 4 does feature some in-game ads that randomly pop up in the menu on many occasions. The game does feature a few in-app purchases, but during the course of gameplay, it is safe to say that they are not necessary and players can pull through the game without paying any heed to it.

Character development has been paid quit a bit of detailing, with every character in-game speaking in a modern tone. Overall, Inotia 4 will not disappoint any RPG fan to say the least. The game has its own share of flaws, but the updates are quite timely and with a few bug fixes, things should go the lag-free way.