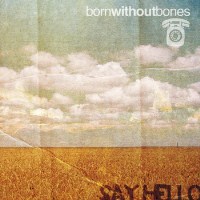 Born Without Bones is a laid back indie power pop band that you’ll find hanging around Milford, MA. Say Hello is the first album for the band and it’s a compilation that pretty much expands on the power pop/emo rock phase that most bands seemed to be stuck in for awhile.

The album features 12 tracks that run the gamut of punk, acoustic pop, and a bit of indie rock. I’m gonna put it out there that if you dislike power pop or anthemic highschool emo rock, then you best stay away. But if you live for this stuff, keep reading and you just might find a gem in this record.

The band is composed of Scott Ayotte (Vocals, Guitar), Jim Creighton (Bass) and Patrick Murphy (Drums) with Say Hello being only about a year old. It was recorded back in July 2010 at Pin Up Recording in Lancaster, PA.

It kickstarts everything with it’s title track; an upbeat, pop punk song that you can easily imagine playing over local radio stations. The track beams with rolling drums accompanied by heavy guitars and typical lyrics about relationships. It nicely starts off the album, setting up a good expectation for the upcoming songs.

Meanwhile, Out of Step and Falling Asleep, follow through on the energy and help to form the best part of the record. These first three songs definitely come with charm, typical of most emo pop punk tracks. Both instrument work and vocals are done really well plus the songs suit their style more. Certain cuts like You, on the other hand, showcase the band’s quiet side with a melodic piano ballad. Although I much prefer them to be loud and rocking out than taming it down, the song isn’t that bad.

Overall, the record is a typical, fun power pop/punk album that most people won’t have trouble enjoying. The album is a nice mix and most of the songs are pretty tight with catchy beats that stay on for a long while. As mentioned, I favor that they stay on the louder side of things than mellowing out, but they do show good versatility with the more subdued songs. Take a listen.