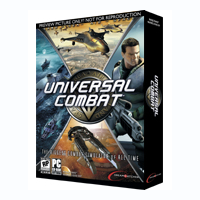 It’s time to pick up your gun and head for the unknown territory. Universal Combat brings us some high-intensity gameplay all dressed up in truly appealing visuals. This is one game that every action lover should pick up for the Holiday season for full-on entertainment.

Published as a freeware by 3000AD Inc., the game witnessed quite a number of downloads owing to the offerings it has up its sleeves. Universal Combat is the successor of Battlecruiser series and the developers have certainly improvised a lot.

Players of Universal Combat are transported into a vast environment with a huge list of transport and combat options. The game is quite exciting due to the touch of realism and a hint of sandbox gameplay thrown-in. You can control and fly spaceships of various sizes and then land on different planets for further exploration. The game incorporates a whooping 21,000 areas of interests to explore adding to the thrill.

Various gamers have pointed out, that it is the size of the area in Universal Combat that is the highlighting feature. Even travelling between places takes alot of time depending on the distance, this is due to the absence on time compression. Developers have done a great job on this front and a big thumbs up on that.

Detailing of the game is also on the higher side with textures, shadows, and interesting characters. There is also a dynamic texture added to the character’s reflexes, with a constant track on players location, hunger levels, AI level and fatigue. Players have a full control over the system onboard the starship, but remember, a bit of distance needs to be covered on foot and a strategy should be followed for any encounters on the way.

Overall the game has many things to offer – and it does it quite well, featuring 15 instant action scenarios and 1 Advanced Campaign scenario, the game will provide hours of immense gameplay to even the most hardcore gaming fan, thou the freeware version lacks a few tracks compared to the retail version. Also there is no Multiplayer gaming support, a bit of a disappointing news for LAN fans, but nevertheless worthy of a the try.