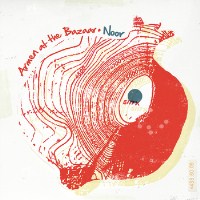 Armen at the Bazaar: Noor

When I first heard Armen at the Bazaar’s Drive With Me, the first thing that came to my mind was that it was equal parts weird and awesome.

Indeed the album is an eclectic combination of sounds. From pop rock, to indie, to sometimes random bits, the record gives these things a fresh take. Listening to the artist feels as if you’re globe trotting and exploring different regions all over the world.

Armen at the Bazaar is described as a one-man-band making music from Montreal. He started out young, playing in the Toronto Children’s Chorus and fronting for various bands later on. His music is honestly tough to classify although he cites that it’s a mix of alternative, indie and pop.

Armen has gone the rounds from different bands but he wasn’t really satisfied and decided to take matters into his own hands by becoming a one-man-band. The artist is said to play all the music himself even while performing live; looping and sampling along the way. This unique take results in an unusual sound that’s both engaging and intriguing.

Noor opens with the 4-minute track, Fire, which channels a catchy indie dance beat. The song is filled with a laid-back vibe that you can imagine playing at a club while people have a good time. Meanwhile, Drive With Me, is probably my favorite cut in the album. It’s fresh and unexpected, not to mention very enjoyable. Various voice bits, samples, loops and great lyrics makes this one a real charmer. Definitely something you should check out.

The remaining tracks each showcase a part of Armen’s capacity to change things up. In The Static White, he infuses his mellow vocals with acoustic guitars and a quieter sound. He continues on with his mellow beat on Anna’s Song but goes surreal pop on the last track, Over the Rainbow.

Noor is a very solid record, it combines a lot of things in an unexpected way yet it still manages to come out as very put together. The best part is that this is all for free! Mosey on over to the download button above and enjoy.