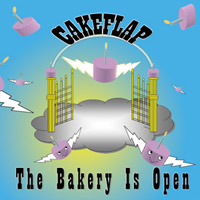 Cakeflap “The Bakery is Open” – The Fiercest One-Track Album Ever

The album The Bakery is Open is the debut album of Cakeflap – a four-member band from UK. According to their Myspace page, the band started as just a collaboration of four ‘disgruntled employees’ who’ve had ‘one too many Digestives’. They then decided to make exhaustingly long songs that run for as long as 20 minutes! The Bakery is Open is a one-track album and that single track is a medley of 18 different instrumental songs. Very understandably, cakeflap describes their music as progressive rock and jazz fusion.

This one instrumental song in the eighteen-song medley sounds a lot like an introduction to an addicting pop track. Just when I was about to brand it as nothing like rock, the richness of Cakeflap’s rock tunes started to set in. The transition from one song to another as you listen to this 16-minute repertoire is quite smooth – you might not even notice that you’re already listening to a completely new song.

I especially liked the transition from the sixth song, Hot Deli and Salad Bar, to the seventh, Dial 78728 for Repairs and Warranty Information. I think the eight part, Nemisis au Lait, was the best part of the song – with a melody that perhaps sums up what Cakeflap means by ‘progressive rock’.

This single track album has a unique ability to rouse different emotions in its listeners – all at the same time. It is definitely worth a listen.