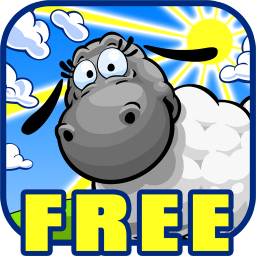 Care for a sweet, nice and casual gaming session that will make you feel silly and also make you laugh? Well, it is time to try Clouds & Sheep on Android. The game is very casual and does not cross any threshold in the gaming world.

Created by Handy Games, this developer is a Top Developer on the Android Market and has churned up some seriously awesome casual games for the iOS and Android platform.

Players get a chance to become the meanest of characters in games, such as, military officers, detectives, terrorists, police officers, superheros, but Clouds & Sheep allows players to take on the role of a Shepard. Players will need to feed the sheep, hook up pairs to create offspring and finally prove to be the best Shepard of all time.

The gameplay is very casual and there is nothing that the game or the developer can boast about. Instead of this, the game holds its own firm ground and leaves a smile on the players face. The in-game graphics are really nice and most of the sheep look simply adorable. The game is made on the sandbox architecture and features mainly, well, cloud and sheep.

Overall, the game features 33 highly challenging levels, hidden bonus items, open-ended gameplay, and most importantly a parental-lock feature to block in-app purchases. Players will need to look after the basic need of the sheep, like water and food. Alongside, as a Shepard, players also have to prevent the sheep from doing any sort of stupidity. So when the sun is shining, the sheep will stand under the sun, until they get hit by heatstroke, and during a chilly weather, they just wait to catch a cold.

Definitely one of the better casual games to have made way to the Android platform. A must have for every casual gaming fan. Thumbs-up to the game as well as the developer.