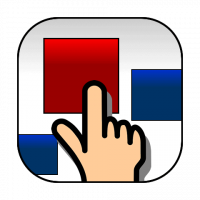 There are times when Blackberry users complain on being the most ignored platform, as far as games and fun apps go. Well, it is quite true that the Blackberry OS stands nowhere in competition with iOS and Android in terms of games. So, here we have an exclusive Blackberry offering, called Finger Trap.

Developed by Tafasa, who already have quite a few casual games under-their-belt, Finger Trap should certainly please all of the Blackberry boys looking for some casual gaming fun.

Finger Trap is as simple a game can get and can be deemed as a complete no-brainer. Players need to hold a small red box and help it dodge the oncoming blue boxes. Its like saying 1-2-3. Wow, if only life was this simple. Basically, the game puts the players reflexes into the test while protecting the red box.

Overall, the game is very playable and can be the worthy contender to Brick Breaker (the most popular and highly rated Blackberry game at present). The only downside with the game would be it being touchscreen specific. So its only the recent Blackberry OS7 lineup and the Blackberry Storm series owner, that would be able to enjoy this arcade enjoyment.