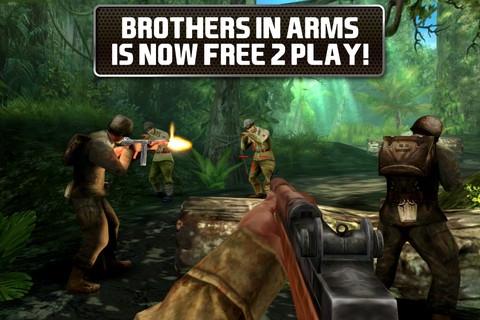 Time to tie-your-boots, load the guns and stack up the ammunition. iOS is being invaded by Brothers in Arms: Global Front; a franchisee game which for the first time ever is being offered for free.

The game has been developed by Gameloft, the makers who have produced visually appealing titles such as N.O.V.A 2, Backstab, Assassins Creed: Altairs Chronicles and a host of other enthralling gaming titles. Brothers in Arms: Global Front certainly lives up the prior releases and the growing legacy of Gameloft.

Brothers in Arms is a gaming franchisee known for the adrenaline-pumping FPS action. Global Front is a step ahead with the inclusion of a full-fledged multiplayer mode, accompanied by a vast story mode. With its immersion into the WWII action, players are able to choose between 5 maps, with 3 game options, i.e Free for All, Deathmatch and Domination. Multiplayer mode supports up to 5 players. Furthermore, the title offers varied gameplay options through 50 unlockable missions, all playable across 5 locations (Normandy, North-Africa, Sicily, Germany, and the Pacific).

Another great addition for players is the ability to drive different vehicles. These vehicles are not only used for going from Point A to Point B, but also for running over opponents (fun for the mayhem maniac) and making cinematic, close-to-death escapes. The in-game vehicles consists of a tank, a glider and an off-roader.

Gameplay is very immersive with the AI reactions being very real. Graphics are top-notch with very detailed surroundings and all those with an eye-for-a-detail will certainly notice the way gun-fire, ammunition, vehicles and terrain have been designed and detailed, replicating the WWII battelfields.

Gameloft has once again done a great job with Brothers in Arms: Global Front, which runs on both iPhone and iPad.