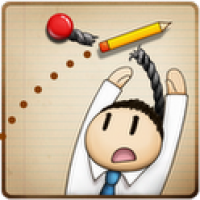 Want to feel like a hero by saving people? Yes, this is your chance to be a hero without a superhero costume or a cape, courtesy of Save Ass Shooter. The game is very simple and packs-in hours of fun with great responsive physic based dolls.

Developed by Addicting Games, this developer is an all new entrant to the Android market scence, but nonetheless has churned up an interesting game for us.

The game is very simple with a bit of a twist. Many players will surely find an uncanny resemblance to the very popular ‘Angry Birds’ franchisee, but this game does not imitate it outright and that is a good thing. In-game there are various physic based dolls that are hanging from the ceiling via a rope and the players task is to get them down.

Well, getting them down is fairly simple. Just shoot pencils at the rope and try to cut them, it just sounds simple. Yes, you need to be careful not to poke the people in trouble during the rescue mission. The game packs-in 64 very well designed levels with varying difficulty to keep the players hooked.

A great addition in the game would be a tool that shows the angle of the last pencil shot. This really enhances the next move of the player, while also increasing the accuracy. Overall, Save Ass Shooter is a killer game. If you have loved to flick the birds around and kill the pigs, why not flick the pencil and save people. Great concept and a big thumbs-up.