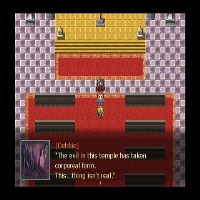 Manos: The Hands of Fate

If you thought you’ve heard the title somewhere before, well, you probably have. Manos: The Hands of Fate is actually a game based on a horror film of the same title. The original movie was written, produced and directed by Harold Warren. Now, the movie didn’t actually set well with most of the public. In fact, according to Wikipedia, it’s considered to be one of the worst films ever. So, how does a game based on a “horrible” movie fare?  Surprisingly, it’s not that bad.

Of course, I do have my reservations on fully recommending the game. After all, it’s hard to distance yourself if you are remaking a game based on a film that’s generally held as “awful” by a huge portion of the public. Nevertheless, it’s quite decent and interesting to play at best.

Manos… is an RPG game that runs for about an hour or two. In the game, you play both lead characters, Michael Downing and Margaret Peterson. Forced to postpone their wedding thanks to a severe thunderstorm, the couple seek shelter in a solitary motel right at the side of the road. The plot thickens when the couple are separated and forced to find their way inside a labyrinth located underneath the hotel. The couple are determined to find each other as they make their way through the maze, helped by two other quirky individuals, Torgo and Debbie.

Controls for the characters are basic. Pressing the directional keys maneuvers them around. If you want them to sprint then hold down SHIFT as you press the controls.

Overall, the game obviously doesn’t have an absolute wow factor but it’s still quite enjoyable to play. If you can look past the bad and sometimes cheesy dialog, then there’s room for you to enjoy this little game.