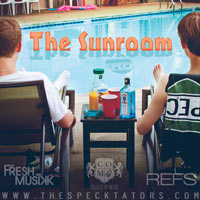 Brothers Patrick and Matt Duda are at it again, this time, they’re serenading their listeners with their latest offering: The Sunroom.

Thriving since 2009, the duo has released a couple of records prior to this one of which, Familiar with Floss, was featured right here at the Frostclick blog some months ago.

Expertly using samples while incorporating catchy beats and using clever rhymes; the album showcases what the brothers do best: create some fun lovin’ music for anyone who knows how to have a great time.

When asked what makes them tick, Patrick shares on a statenews.com interview, “when we can combine our two enjoyments into one, we make songs that everyone can like and have aspects of music that everyone can enjoy.”

The Sunroom contains 10 exciting tracks with fun and surprising samples incorporated in most of them. Off the bat, you’re greeted with a familiar tune in the form of Mark Morrison’s Return of the Mack. The boys sample the catchy song and turn it into a great opening single. Most of the tracks border on smooth R&B and hip hop, like in Somethin’ Bout A Sundress and What’s the Deal. Occasionally, the duo indulge their dance pop side like in the cut, Falling Up.

There’s really no stopping The Specktators, as they march onto the scene and wave their banner proudly. Even though there are no all-original tracks on this one, the album serves as a great platform for the guys to experiment and ultimately find their own sound.

From the looks of things, they definitely have an ear for turning a once familiar track into something different, satisfying both those who know the original sampled cut and those that don’t. It’s great music however way you look at it so best grab some drinks, gather up great company and enjoy!