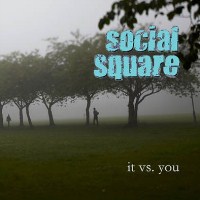 Social Square: It vs. You

Three piece indie rock band, Social Square, likes to call themselves the “Benjamin Button of indie rock.” According to the band, they like to work backwards. When other bands simply mellow down as they age, it seems the band likes to get loud as they grow old.

It vs. You is the bands latest mini three song release and features punchy and loud indie rock tracks with a 90s to early 2000 vibe.

Social Square has released several songs including their first demo album that features 4 tracks, So Cold. This was recorded in a studio in Paris back in 2006. In 2009, they released No Help From Here, which also contained 3 songs.

The group was founded in 2005 during Christmastime and they love anything that’s considered loud. This adoration for anything loud definitely shows up in their tracks. Cuts like, Walk in Your Shoes, have a melodic pop rock feel to it. With strong, simple riff oriented guitar work and slightly wailing vocals; it’s a nice cut to enjoy on a fun summer afternoon. Title track, It vs. You, contains fast paced percussions which blends nicely with Pat’s (vocalist) interesting vocal work. Finally, No One Knows, highlights the bass and vocals which perfectly creates a great melodic rockish track.

Although the quality of the vocal work and recording might not impress some people; personally though, it sounds fine. The album is a great collection of cuts that the band will hopefully expand into a full length album.