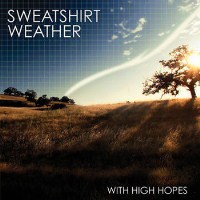 Indianapolis natives, Sweatshirt Weather, is more or less a young band, but this doesn’t mean they can’t hold their own when it comes to beautiful and fun summer pop rock songs.

With High Hopes EP was released in BandCamp back in January 2010 but it wasn’t until 2011 when the band officially solidified as a group. They were joined by bassist, Chad Kulaga, by this time and faithfully started their journey in the indie music world.

Their brand of summer power pop has helped propel them into the spotlight and has allowed them to share the stage with the likes of The Fold and The Bigger Lights.

The band’s goodluck seems to be on a roll as well since they were given the opportunity to work with two major producers Jim Wirt (Jack’s Mannequin, The Rocket Summer) and Rob Freeman (Armor for Sleep, Parade the Day) as they recorded their debut. They don’t let this good luck stop them from pushing their band further though.

Since 2009, the members make it a point to self-promote themselves, actively seeking bookings for gigs etc. It’s this kind of hard work that has also led the group to discover success in securing fans. Of course, it helps that their first single “Be Someone” was also very catchy and likable.

With High Hopes EP is a breezy compilation that debuts the band’s power pop sound. Opening single, Fall and 106, is a moderately- paced piano rock cut reminiscent of the All American Rejects when they first came out. It’s followed by an equally catchy and upbeat track, Maybe We’ll Make It Summer. The track centers on a more pop vibe as it chronicles the heartbreaks and summer romance that comes with it. You can expect the rest of the record to maintain this uptempo power pop sound. Only slowing ever so slightly to wrap things up in Live it Up; a feel-good song that features unison singing and handclaps.

Sweatshirt Weather seems like the perfect choice for fans of All American Rejects or maybe Jimmy Eat World. Their sound makes you think of relaxing summer days where colorful memories seem  perfectly made to be reminisced later on. You can grab the mini album over at their BandCamp page, it’s currently available as a free download.