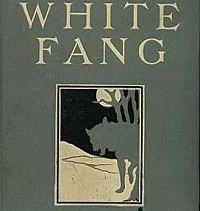 White Fang by the famous Jack London is the perfect companion for a night of solitude. After its publication in 1906, this well-known novel has been the cause of the nature fakers controversy, a literary debate between science and sentiment on popular culture.

Jack Griffith “Jack” London is an American author, journalist and an advocate of unionization, socialism and the workers’ rights. He was one of the first fiction writers who became popular worldwide mainly due to his masterpieces such as Call of the Wild, White Fang, Klondike Gold Rush and many more.

Written as a companion for Call of the Wild, the novel revolves on White Fang, a wild wolfdog who goes on a journey to civilization, surviving on a fierce and merciless landscape.

The author’s unique way of telling the story from the viewpoint of a canine was clever and hard. It takes a great writer to clearly pull-off such an act. Also, the adventures in this book were well-plotted; I love how the author unconsciously tells us that it’s a savage world out there.

Overall, White Fang is a beautifully written masterpiece that succeeds in so many levels. Jack London’s attempt to dehumanize an animal character and retain its true nature paid off.