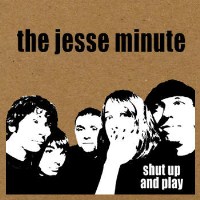 The Jesse Minute: Shut Up and Play

Describing themselves as a “female fronted 5 piece pop punk killing machine with nothing to lose” seems quite accurate. The Jesse Minute is a band that loves throbbing energy and some fun punk hooks.

Shut Up and Play was released two years ago in 2010 but it’s still an album that’ll get punk fans excited.

Throwing catchy hooks, jangly guitars and sweet female vocals in the fray, the band makes it hard not to bob up and down as you listen to each track. Perfect for some basement party you’re throwing or if you simply want to get in touch with your pop punk roots.

These Providence natives are loud and proud. They kick things off with the jumpy and energetic cut, Sinking. The song is armed with a good beat, catchy rhythm and gnarly vocals which definitely set the mood and pace of the entire record. There are 14 tracks in the album but true to the punk aesthetic, none of them are over 3 minutes long. One track rolls after another. A few  tracks that you shouldn’t miss include Pathetic, Left Behind, and I’m Not Fine.

The Jesse Minute’s sound resonates with a 90s flair which is both refreshing and nostalgic to hear. Even though the band released their initial offering in 2009, their sound brings to mind the heydays of dirty, indie punk basement rock. Occasionally, you’ll also catch a glimpse of the Yeah Yeah Yeahs, while on other tracks you get that ballsy punk rock sound of, The Ramones.

Shut Up and Play might have tracks perfect for the attention deficit but it’s also got plenty of charm. From the vocals to the attitude, these guys definitely have something up their sleeve.

Although I’m not sure if  the band is still together, there’s no denying their sound is a real pleaser. What are you waiting for? This is worth grabbing if you’re in the mood for some 90s indie punk rock. Take a listen.