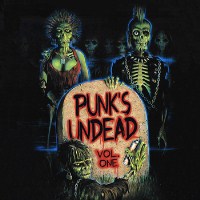 Punk is not dead! For the many punk lovers out there, Punk’s Undead Volume 1Â might just be the album you’ve been looking for. This 28 track compilation features great tracks from various punk rockers in the Chicago area and neighboring cities.

Released under Illinois indie netlabel, Sematary Records, the compilation is one big punk fest featuring songs that are energetic and quite raw in places.Â Described as the record label from the grave, Punk’s Undead – Volume 1 is definitely an interesting compilation fit for any true blue punk rocker.

Opening with Roberta Sparrow, these hardcore punk rockers arose from the remnants of Vice Dolls. The group blasts through the compilation with Poison the Air We Breathe. This short but highly energetic track bounces everywhere and definitely gives you an idea how the rest of the album will be.

Although much of it is loud, fast and brash, the entire album isn’t strictly punk rock. Occasionally you’ll encounter a progressive death metal track like Sinister Tongues from Scavenger; a punk power pop song like Relocator from The Knockdown; and several female led punk numbers, particularly from The Burminators and The Regulars.

Punk’s Undead Volume 1 is filled with quite a few impressive punk tracks to enjoy. Although you might find some of them a little unpolished, there’s no denying that the punk aesthetic is alive and kicking. Take a listen and grab the download.