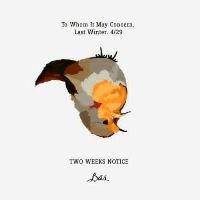 After hitting big with his single Charles De Gaulle to JFK, Bas suprises fans with Two Weeks Notice, a six-track mixtape consisting of freestyles, remixes, and over cuts.

The Dreamville Imprint artist enlists some beat-heavy, raw tracks that conquer the stage and lure the ears. The flawless sultriness starts in City of The Empire, where jazz-tinged horns intertwine seamlessly with chunky and well-cut lines.

We Made It follows with more soulful/lounge samples in hidden in its sleeves. Combined with freestyle rapping and rumbling low beats, this track is the perfect anthem while chillin’ out with good company. The steady sax that continuously plays on the background adds a revitalizing twist to the hip hop style. Red Hot Car, on the other hand, delivers a funky rap track that pulses and churns in every line and tempo.

Bas gives his own twist of Pharell William‘s hit Happy. Layering rapid wordplay with the song’s funky sound, the artist concludes the album in an energizing and delightful note.

Two Weeks Notice is a short mixtape that features easily digestible hiphop pieces that are mainly focused on entertaining and delivering an enjoyable musical experience to fans.