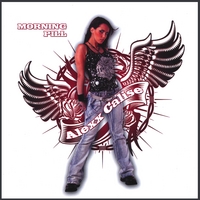 “Delivering a sound that is both fresh and uniquely her own, Calise combines hard rock, grunge, and urban-edged pop with crunchy guitars, angsty lyrics, and an instantly identifiable vocal that is hauntingly beautiful and completely raw all at once.” Her strong personality and undeniable musical talent has already earned Alexx multiple corporate endorsements and her songs have been featured on TV, even though she is just starting with her debut album “Morning Pill”.

Alexx Calise grew up in Fort Lauderdale, Florida picking up the guitar at age 11 and learning her craft by observing her father play and listening the her parents vast record collection. Shortly thereafter, she began fusing the poetry she has been writing since early teenage years with her own music and the she hasn’t stopped since.

Now Alexx lives and creates in Los Angeles, California and even though is has released her debut album, “Morning Pill”, quite recently, she is already collecting accolades and making business deals. She is endorsed by over 13 music gear/clothing manufacturers, her songs are on “heavy rotation” on cable music networks, her single, “Pull It (Bullet)” is peaking on AUS/NS tracks and her music has appeared in several national TV commercials and promos.

Currently, Calise is creating the follow-up to her 2007 critically-acclaimed debut album, Morning Pill, writing for her indie musician’s advice column for the L2P Network and GHS Guitar Strings E-Newsletter, and touring with the P.A.C.E. Program, which provides entertainment to children in various LA County schools. Calise is also the other half of “Sound of Cancer,” her new music project with accomplished drummer/songwriter, Dennis Morehouse.

Alexx Calise definitely understands the current music business. Her music is on every reputable website, she is not afraid to strike endorsement deals, license her tracks she and play concerts whenever possible. More over, Alexx understands the importance of her fans and giving back to her listeners. She has given us permission to distribute some of her songs FREE on the P2P network for all music lovers to enjoy.