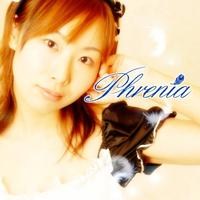 Phrenia is a Japanese pop singer that has recently made her debut EP available for free download on Jamendo. It’s under a creative commons license and one of the few compilations from a Japanese artist straight pop lovers can enjoy.

The album is filled with five electronic dance pop tracks that reminds me of those wonderful Japanese anime soundtracks. Phrenia has actually released a previous single on Jamendo as well, titled Yami No Conduct.

Compared to her first release, this self-titled debut features tracks with a less prominent rock flair; instead it’s mostly all pop. Nevertheless, it’s still very enjoyable if you adore J-pop.

The record opens with the dance pop single, Dilemma, which for some reason makes me think of Macross (or Robotech for the Western audience.) I think it’s the pop, spacey vibe of the track that makes me feel as if the idol singer/actress, Lynn Minmay, aboard the SDF-1 Macross could have rocked this number effortlessly. If you were totally lost by that reference then hit the links, ladies and gents.

Another is the third track from the EP. This one is a bit more mellow but not really slow. It’s a reflective cut that makes me think of quiet adventures on a cloudy day. The song showcases Phrenia’s beautiful and strong vocal work. Plus, it has a very nice melody that is catchy and easy to listen to. SIGNAL, on the other hand, has a more rockish feel to it. The song is upbeat and lively, bringing in a whole lot of good vibes down your way.

Overall, even though she might not be the next Utada, she does have her own touch. Phrenia has wonderful strong vocals and a great compilation of dance pop tracks that are super catchy. It’s enough to make any J-pop lover a believer in her skills.