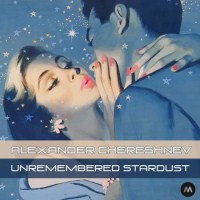 Artist and composer Alexander Chereshnev, has unveiled his latest project titled Unremembered Startdust. The EP comes equipped with 4 tracks that are both hauntingly dreamy and melancholic.

The artist has been around the music scene since 2004, producing various types of music and releasing a few EPs. Among his first compilations was a short record titled Going Home. This was released under his then moniker, Siberian Son.

After this first foray, he followed it up by releasing various vinyls, singles as well as contributing to different compilations including this latest record.

His previous works were supported and welcomed by quite a few world-famous DJs the likes of Hernan Cattaneo, Nick Warren, Paul Oakenfold, John 00 Fleming and Anthony Pappa to name a few. Moreover, his succeeding albums also gained plenty of notice. Although he’s moved on to a more ambient, downtempo vibe; the artist still brings in that special touch.

Unremembered Stardust is his latest album. As each of the track plays, the artist brings you to a world where deep and dreamy sounds abound. Starting with Vanishing Memories, you get this foreboding feeling ringing in. It’s haunting but also filled with a nice melodic touch. Meanwhile, Parfois is a gorgeous track that features spoken word in French along with some atmospheric sound while Some Other Color, is one of the more upbeat tracks on the record. Finally, the EP is finished off by Non Mi Ricordo which features SackJo22. The song has that Elvish feel like something you can imagine fairies, nymphs and elves would sing to themselves in the forest.

Overall, you get a short but concise compilation that stirs the senses. Each cut somewhat represents the artists’ capacity to mix different styles and genres; making the record a delight to listen to. Go ahead and make sure to grab the download.