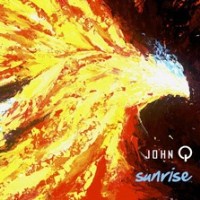 John Q is not a single person but instead a collective of musicians who enjoy playing alternative pop rock and penning tunes that focus on songwriting and storytelling. With Sunrise, the group showcases what they are best at, creating alternative mellow tracks that people can relate to.

Each cut on the album narrates a special story that helps listeners feel good and reflect on the lyrics. It’s an album filled with easy listening tracks that are worth listening to. John Q is made up of John Allison – Vocals, Guitar, Dave Turner – Guitar; Scott McAtasney – Bass; and Mike Padgett – Drums.

These St. Petersburg natives claimed the moniker John Q, stating that it denotes the “everyday Joe.” This generic persona helps the group bounce off their personal experiences and stories through their songs lyrics and content.

Their first EP, Brushfire, was released back in 2007 in Tampa and their current offering, Sunrise, is their first official album. With their mellow alternative, sometimes acoustic vibe, it’s not difficult to imagine why the band is growing in popularity by the minute. They are currently touring the South East Region in hopes of extending their fan base.

Sunrise carries plenty of potential hits, but there are a few that stand out from the line. Nobody’s Hero, for one, is a beautiful and up-tempo cut that in places reminds me of Dave Matthews Band.  Moon Song, on the other hand, is a quiet and very melodic track that features heartfelt vocals and lyrics.

Overall, the album is one of the worthy finds from Jamendo. Even though you might not like the entire tracklist, you’ll definitely find one or two hidden gems in there.