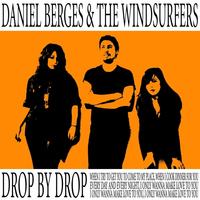 Daniel Berges & The Windsurfers comes out with their debut album, Drop By Drop. The record is a beautiful mix of pop, punk rock, alternative and a bit of jazzy blues. The group first got together back in August of 2010. Since then, they’ve been steadily performing live gigs that are known to “raise the temperature.”

Drop By Drop is the first album for the group and so far they are making quite an impression. Experimenting with pop, rock, blues and even jazz; the band is eager to show what they’re capable of.

If your’e looking for a specific genre to peg these guys at, you’d better think again. Listening to the entire compilation is like taking a trip from the punk rock era to the riot grrrl days and even back to the honky tonk days of 50s swing.

With opener, Aint That Good News, the guys showcase their flare for alternative punk pop. The song is catchy and I love the retro sound of the band. Meanwhile, the band does a complete 360 with the single, On the Wall. This one sounds like it belongs to the Riot grrrl movement. With the strong female vocals and the rockish, punk flair, it’s hard to think otherwise. Some of my other favorites from the record include, the laid-back Ten Minutes Ago and the blueesy I Only Wanna.

The band might be relative unknowns but they are definitely making a statement. The group is composed of Vanessa Montilla and Linnea Eriksson on vocals, Daniel Berges on guitar and vocals, Dylan Coleman on bass, Ignacio Rivas on drums and Philip Hundhausen on rhythm guitars. Check them out see which ones are your favorite tracks.