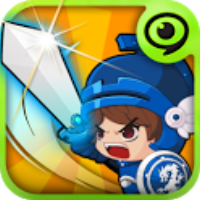 Epic Raiders is one of the most exciting RPG arena games for the Android. Published by Gamevil Inc, it allows players to create groups of fantasy figures and battle monsters in stunning 2D. The easy game controls, catchy music and sharp and cute graphics make it stand out from other RPG games in the market.

Thanks to the game’s easy controls anyone can pick it up, and it’s nice to see the battlegrounds having a lot of variation. Also once you’ve got your fill of fighting monsters, you can opt for player vs. player. Epic Raiders lets you choose from different fantasy characters: a healer, a saint, a melee fighter, a knight and more.

Just like traditional RPG games, all the characters have defense, attack and health ratings. And they also specialize in a particular area. An example is the barbarian, who has a very powerful attack mode but is defensively susceptible. The hunter is a good attacker too, but can only connect in long range.

To control you just tap their image on the screen and simply drag them to where you want them to hit or move. As Epic Raiders progresses, your character can pick up special weapons and equipment and their skill level will improve.

Epic Raiders is an easy game to learn but it is hard to master. The dungeon battles in particular, can be very challenging, but it doesn’t take away the fun factor. There’s plenty of fighting here, but strategy is also necessary, so this is one game you’ll be playing for a while.