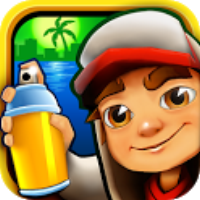 Subway Surfers is one of the more exciting runner / action games for the iOS and Android. With its smooth graphics and simple controls, you’ll have no problems picking up the game and having a blast. Created by Kibo, the premise is very simple; run as fast as you can and avoid the cops. It’s simple all right and a lot of fun.

In Subway Surfer, you’ll not only have to dodge the cops but must also avoid trains and other obstacles along your way. To help you out are numerous power ups that you can grab like hoverboards and jetpacks. While the gameplay is fast, you won’t have any problems learning how to play since the controls are standard.

To switch lanes just swipe left or right, and down to tuck yourself and double tap to activate a power up. The game is pretty challenging but it doesn’t have any of the sharp corners that come with other runner games which reduces the difficulty somewhat.

The power ups are also nice; apart from the jetpacks and hoverboard, there’s also a magnet that will draw all the coins near you, boots that will give you a speed boost and many more. But the coolest is definitely the jetpack as it gives you the ability to fly. The in app purchases are there, but they’re not required to play the game.

Subway Surfers also comes with several missions, which is a great feature, giving you something else to do aside from running as fast as possible. The daily challenges consist of tasks that you have to complete in a day, adding more fun.