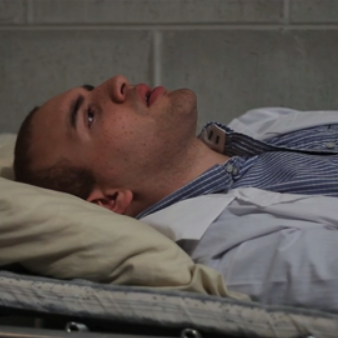 With a runtime of around 25 minutes, Clever is an intense psychological film with an outstanding directorial effort. It was premiered at the Reeve Union Theatre at the University of Wisconsin Oshkosh.

The short tells the story of a scientist trapped in the sub-level of a science facility. Suffering from perpetual grief, he is forced to the edge and becomes the first person to breath a new life, not through reproduction, but multiplication.

Formed through serious brainstormings between the directors, the narrative offers an intriguing plot that is never what it seems. One thing that is present to the film is its concious effort to solidify the main character. I love how the scientist background was inserted to the film without even changing location. Through this, the audience gets a clearer picture of the character’s mental and emotional stability.

The lighting was also spot on. The gloominess and darkness of each scene add a mysterious atmosphere to the story.

Stylishly made and narratively rich, Clever is that kind of film that stands out and invites multiple viewings. It’s an intricate feat of mindplay that will keep you on the edge of your seat.