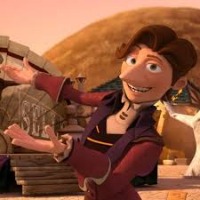 From the school that created FriendSheep, PrimerFrame, comes another short film that will transport the audience to a whimsical visual experience.

El Vendedor Humo (The Smoke Seller) is a 6-minuter animation that tells the story of a mysterious vender who transforms and deceives a sleepy town through his magical smoke. It’s directed by Jaime Maestro and produced by Carlos Escuita.

Stepping outside the boundaries of what seems like a rather conventional heartwarmer, the creators gave birth to a fresh narrative that will capture eyes from start to finish. Scene after scene, the story tempts and tricks the audience, transforming the film into an unpredictable little piece of gem.

The smoothness and elegance of the story is also translated into the animation by creating deligtful characters and vibrant animation. The charm of the film of the film did not overpower, but instead worked hand in hand with the grounded story.

All in all, El Vendedor Humo lives up to its potential. It’s a great film that’s suited for the whole family. So press play, watch, and let this film brighten up that gloomy day.