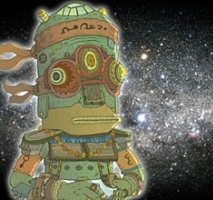 Mark Sutherland brings another visual spectacle to the screen with The Astronomer’s Dream.

Written, directed, and animated by the talented Sutherland, this 11-minuter short animation envelopes a fantasy that would take you to the outer space. As the website describes it, the film starts with a hungry astronomer who falls asleep while working on a problem. He then discovers a solution not in outer space, but in the surreal food chain of his subconscious mind.

First few minutes through the film and you’ll be enthralled with its surreal, beautifully drawn visuals poured on each scene. The astronomer’s subconscious, the gigantic robot and its mechanical mind all come to life at the breath of Sutherland’s creative genius.

The narrative delves on the process of symbiosis and how one does not learn from his experience, trying to make the same mistakes until something good comes up. The robot’s unending attempts symbolically show the thinking process of the astronomer and how he came up with an answer.

This short sheds another light on Sutherland’s graphic genius. Unlike his other film Umbra which was organically simple in design, The Astronomer’s Dream makes a trigger happy ride on its color palette.

The other amazing artists who made this film possible are Leon Lo (sound/music/violin), Lucas Fehr (voices), and Louise Campbell (clarinet).

All in all, The Astronomer’s Dream is a richly-detailed and sumptuous film that will give you eleven minutes of outer space magic.