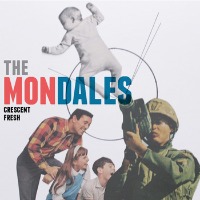 Crescent Fresh is the second album by The Mondales, a three-piece pop punk band coming from St. Louis.

As an upcoming group from a genre where bands like New Found Glory, Blink-182 and Paramore already flourish, they sure have a numerous challenges to conquer but nevertheless their humble beginnings will eventually lead to their inevitable mainstream success.

In this fourteen track music catalogue, the trio has managed to coherently travel between different musical endeavors and pull powerhouse singles through classic hardcore homages.

CharlieBrownCore progresses nicely from a youthful attitude to a more processed mature standpoint. Raised by Necroborgs’ musicianship is crisply upbeat while the vocal choruses and melodies are infectiously driven to drill into your subconscious. Art School Drama Bomb is somehow a cheesy ballad effectively thrown at the middle of the album to serve as a cooling off period.

Writing About You has a smooth sailing build up that slowly climbs to an undeniably contagious climax. It wraps off with You Don’t Know Jack, which really is an effective closer because it doesn’t emphasize on the saturation of too much pop.

Crescent Fresh is a hell of a fun compilation and solidifies the band’s musical talent and capabilities. Having this attitude of making bold steps in mainlining a mix of their upbringing and expanding on it with a radio-friendly twist will surely dominate commercial audiences in no time.